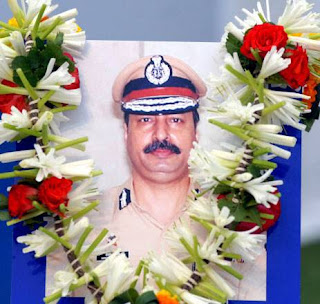 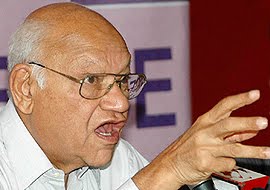 Hemant Karkare laid down his life for his friends. Every man and woman in the land was his friend. He did not discriminate between man and woman, Hindu and Muslim, this caste or that. He was a professional policeman. And he was a patriot. And that is what people expect of their public servants.

Karkare belonged incidentally to the topmost tier of the pecking order in the hierarchy of castes. That factor became irrelevant when he donned the uniform. Traditional culture was subsumed by a new “police” culture, which demanded that all citizens are treated equally. In the eyes of the law all are equal. Any policeman true to his salt would follow this maxim, which becomes his “dharma”.

I knew Karkare well. He was one of the — now, unfortunately, diminishing number of — IPS officers who enjoyed an unsullied reputation for integrity, both financial and intellectual. People who wanted true justice would gravitate towards him. He did not know what it was to speak anything but the truth (or what he felt in his bones was the truth).

He came to meet me on November 25, 2008, a day before his life was extinguished by jihadi terrorists. He came to tell me he was disturbed. He was disturbed because L.K. Advani had the previous day, or a couple of days earlier, accused the Maharashtra Police Anti-Terrorist Squad (ATS), of which he was then the chief, of framing Sadhvi Pragya Thakur and others in the Malegaon blast case. He said he would not dream of framing anyone and I believed him because I knew he would do nothing wrong. I told him I would speak to Advani personally as I had faith in his integrity.

Karkare had brought the case papers to show me that his investigations had nailed the real culprits. I did not look into those files for lack of patience. I am sorry today that I did not take more interest in his findings. If I had done so I could have attempted to defend that good and honest man with concrete facts. He is not alive to defend himself against all the forces that have been unleashed against him in his absence.

But I cannot let these forces go unchallenged. I will not be able to refute them on the details but the police officers who knew him are sure that he was not one to concoct evidence. Investigations were conducted first by Karkare’s predecessor in the ATS, then by the dead man himself and now by the National Investigation Agency (NIA). The investigators seem to be hopelessly at odds with each other: The first set actually arresting the usual suspects, the second collaring a more plausible group with concrete proof in the shape of telephone intercepts and recorded conversations, and then the third watering down the evidence and charges against the alleged culprits named by the Karkare team. It is highly unusual for later investigators to weaken evidence in this manner. They are expected to strengthen cases, not do the opposite.

When the well-respected public prosecutor, Rohini Salian, bemoaned the attempt by the NIA to influence her to soften the case against the Hindutva ultras, I expected them to be let off. But, even in my wildest imagination, I could not have dreamt that to achieve this objective a national hero like my friend Hemant Karkare, would be sacrificed. His reputation was all that was left of him and that is being buried.

Hemant’s wife died a natural death not many years after his assassination. The pain was too much for her to endure. If she was around she would have fought. I have no doubt about that. But in her absence and in the absence of his daughters who are abroad, it is left to old colleagues like me to come to Karkare’s defence.

I have spoken to many officers and policemen who were disappointed with the NIA’s decision to sully the fair name of a trustworthy and fair-minded colleague. It smacks of an attempt to snuggle up to those in power. I had sensed a similar disenchantment in the force when the Central Bureau of Investigation (CBI), in the Ishrat Jahan case, named some Intelligence Bureau (IB) officers in the conspiracy to eliminate Ishrat. For the first time I saw one Central police agency trying to rope in a sister agency’s operatives in a criminal conspiracy when the ways of working of the latter agency are well known to the rank and file. “Snuggling” was apparent there too. If a law is in place to prevent “post- retirement” sinecures the tendency to “snuggle-up” will reduce.

The developments in the Malegaon blasts case have shown that the Hindutva forces are succeeding in widening the Hindu-Muslim divide.

When Karkare came out with his list of culprits it was easy for us Indians to proclaim that India was different from Pakistan. In that benighted country, jihadi terrorists are always protected if they act against the “enemy”, that is us. We proudly proclaimed that ours was a land governed by the “rule of law”. Hindus killing Muslims would be dealt with as sternly as Muslims killing Hindus.

But that pride has to be discarded now. This emperor, too, has no clothes. We are slowly but relentlessly moving towards being bracketed with Pakistan in our attitude towards the law, terrorism, and the minorities. I doubt if we will ever get to sit on the high table if the law is not enforced equitably and fairly.

When the NIA finally came out with its conclusions in the Malegaon case, my Hindu friends kept a studied silence till I cajoled them to comment. A leading question on the denigration of Karkare evinced a tepid response. But when I identified Islamist extremism as the cause for the unexpected and unusual birth of Abhinav Bharat they were infinitely more enthusiastic. My Muslim and Christian friends, on the other hand, were eager for me to articulate my thoughts through the media. The divisions are sharpening. And that is not a good augury.